on August 5, 2010September 1, 2015 by Charlie
I was delighted this morning to find in my mail a copy of the much anticipated Coco & Igor from Soda Pictures. I’ve never reviewed a film on this blog before and felt very honored that they thought I was up to the task. 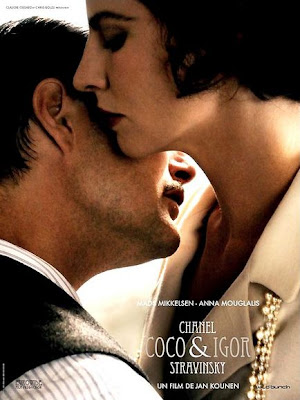 I must say the film wasn’t quite as I expected. The film follows after Coco before Chanel, she is already an established fashion designer and is mourning the death of her ‘Boy’. Stravinsky has had to flee for France due to the Russian revolution, where he meets Coco, who is a fan of his work.
It’s a very dark romance that sees Coco inviting Igor along with his wife and four children to come and stay with her, and then begins this dangerous love affair. The sex scenes are more frequent than I had previously imagined and very raw, it’s awkward at times and hard to not think about his poor wife who is ill in bed upstairs. Accompanied by Stravinsky’s music score throughout it made the film even more intense to watch.
I think Coco is portrayed in quite a harsh manner, we know she is fiercely independent but she comes across quite selfish and a bit of a villain. Coco is such an icon for me, I think the film lacked passion for her work, and focused all on this dark romance which was actually quite sour. The costume and set design is of course exquisite all the way through, which saved the story line for me.
I am a romantic at heart and this film was more of a dark art-house piece that was doused in harsh reality. The film is definately worth seeing at the cinema, I would have preferred to see it on the big screen to take in the beautiful aesthetics and costumes.
The film is out in cinemas tomorrow, go with an open mind, I am keen to hear what you all think.